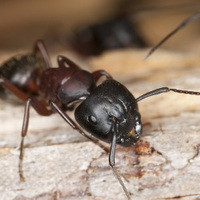 Ants are never taken seriously. An unfortunate and cruel childhood rite of passage is to learn the wonders of energy transfer by using the sun’s powerful UV rays to roast the insect through a magnifying glass, giggling as its legs crackle from the high temperatures. We’re taught from a young age that ants are nothing more than a nuisance, a frail creature that we routinely squash beneath our sneakers. Sure, they might ruin an altogether perfect outdoor barbecue by crawling over the brisket slabs you cured for days, but you might not consider hiring a pest management company to perform a full-scale investigation of the ants living in and around your home.

As a property manager, however, certain ant species can ruin your building’s structural integrity and possibly harm the wellbeing of your residents. These creatures can hide within your building’s walls and throughout the foundation, so it’s imperative to proactively monitor and track their movements. Today, we examine three different ant species that require immediate professional attention, if identified to be in your building.

We’ve extensively covered the residential determinants of a carpenter ant infestation, which largely consist of faint “tunnels” these insects have bored through the wood in your home – i.e. your siding, deck, or even load bearing structures. For this particular breed, their behavioral patterns very much mirror termites, as carpenter ants utilize moist wood structures as their means of moving throughout a building. Unlike termites, however, this insect is mainly seeking sweet tasting objects for food, rather than the wood itself. Upon finding its food source, the workers in the colony will signal to others and begin swarming.

A carpenter ant infestation in an apartment building will not only wreak havoc among your residents, but it also represents the first sign of structural damage or ongoing drainage complications. Because this insect prefers decayed or rotting wood, multiple reported incidents from building inhabitants could easily mean thousands of dollars in damage. Not to mention, your guests may not be thrilled at the ant population in the rooms.

Despite being erroneously named due to a false assumption that they were an ancient Egyptian plague, pharaoh ants still seem to be appropriately named. Their reign over a building is not unlike Ramses or Tutankhamen in that their dominance is widespread. Worker pharaoh ants will infiltrate your structures’ heating sources or crawl through the piping system in search of greasy meals, all the while the queen and respective colony remain shrouded in your building’s darkest corners. With an almost pale exterior, these particular ants can often go unnoticed to the naked eye. This species has also been known to transmit diseases, which could be concerning to your residents.

Much like Egyptian lore, the pharaoh ants are seemingly everlasting and indestructible. When threatened by chemical sprays, the entire colony will disband and spread throughout other crevices in your building. Eventually, they will form new colonies and appoint queens to those sectors, a process known as “budding.” Thus, contact a pest care professional the moment a pharaoh ant infestation is noticed within your building. They will review the layout and strategically place baits, doing so in a way that allows the worker ants to forage and directly returning the poisonous materials to the nesting source.

As one might guess, pavement ants emerge from the earth’s underbelly, usually from the cracks in your driveway via dirt pathways and spreading up through your home’s foundation. These are the irritating pests that ruin picnics and swarm over a dropped ice cream cone, rather than physically destroying certain items.

However, a queen pavement ant can produce winged offspring that can swarm into a room and develop a new colony. This could easily happen within your apartment complex and cause psychological distress among occupants. Similar to bed bugs, the thought of multiple insects crawling throughout one’s apartment can be unsettling. When a tenant reports a possible infestation, consult your pest management team on the proper steps to treating the area in a holistic fashion.

Contact us to learn more about our property management services.