Home:Blog, Stinging Insects:Three Common Bees You Can Find in Wisconsin

Three Common Bees You Can Find in Wisconsin 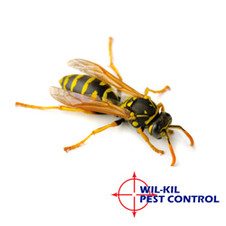 Getting stung by an insect can be a particularly traumatic experience for a child. You can probably think back to the first time it happened, when you were running around the playground and suddenly felt a sharp pain along your arm. This triggered a reaction that most likely persists today: “avoid all flying yellow creatures at all costs.” Now, any flying insect circling a trashcan may cause you to go into a frenzied state.

It’s a fairly common response that even has its own phobia classification, “melissophobia” or “fear of the honeybee.” Yet, this is just a simple misunderstanding of bees as a whole. Bees are not usually to blame for stings; they are relatively docile creatures and will only sting if threatened. Generally, the yellow and black insects that are stinging are wasps or hornets.

Wisconsin’s state insect (a useless fact perfect for trivia night!), the honey bee was originally a non-native species imported from Europe. They’ve since become established throughout the country, accounting for a portion of the United States’ honey production, in addition to helping pollinate local flora. Plump around the abdomen with a yellow-orange tinge around its hairs, the honeybee is readily identifiable from its colors despite often being confused with a wasp. This bee species usually has much larger colonies than most, with totals reaching up to 80,000 in a single hive.

Its large colony size is what frightens most people. Upon swarming in the search for a new home, roughly 60% of the hive will take flight and fill the air. This can look rather menacing to the unsuspecting observer, but they’re a particularly docile species that won’t sting unless provoked. Should one sting you, however, quickly remove the stinger as soon as possible by using a pair of tweezers. Most individuals don’t exhibit any allergic reaction to a sting (one or two of every thousand), but closely monitor the affected area. If symptoms worsen over a few days, consult a physician.

A more delicate aspect is removing a honeybee infestation from near your home. They may establish a new colony around your home and frighten your family or visitors. It’s important that you do not use homemade remedies or pesticides yourself and consult a pest professional immediately. You could inadvertently destroy the current population and upset the surrounding ecosystem. A professional entomologist can properly handle the hive and preserve the remaining bees, introducing them to a new environment at a later time.

The bumblebee is considered to be the most important pollinator in North America, with a unique ability to cross-fertilize a number of different plant species at varying temperatures and climates. This explains why the bumblebee’s presence is felt throughout the country, extending from coast-to-coast and border-to-border.

It stands in stark contrast to the honeybee in a number of factors. First, they’re much larger, almost double the abdominal size. Second, they prefer much smaller colonies of 50-400. Third, they prefer to nest in deeper cavities of the earth, such as abandoned rodent nesting areas. Again, as we emphasized above, don’t attempt to remove bumblebees from your yard without first consulting a pest professional. Pesticides you bought through Amazon won’t be effective and may do more harm than good.

Bumblebees can also sting, though with less severe reactions than a honeybee. Usually it consists of minor swelling, itchiness, and redness around the sting location, although you should always monitor your reaction.

Named for their propensity to seek out the salt found in human sweat, the Sweat Bee is another frequent pollinator of North America. Unlike both the honeybee and bumblebee, the sweat bee features a green metallic hue along its abdomen and is rather small, measuring between .125 to .5 inches in length. This species prefers to reside in shallower ground, building a network that usually exists in bare soil.

The Sweat Bee’s colony can easily be unearthed by the unsuspecting gardener, but fear not. Their stinger is proportional to its body size, making its sting the least painful of any bee species. They may be attracted to the sweat forming on your skin from the summer’s cruel temperatures, but you shouldn’t be alarmed should a sweat bee land upon your arm. It won’t sting you unless pressed into your skin, so calmly brush off the insect and continue on your way.

If you need stinging insect control on your property, contact Wil-Kil.