Home:Blog, Pest Prevention, Stinging Insects:When Wasps Attack: Signs of a Wasp Infestation and How to Prevent One

When Wasps Attack: Signs of a Wasp Infestation and How to Prevent One 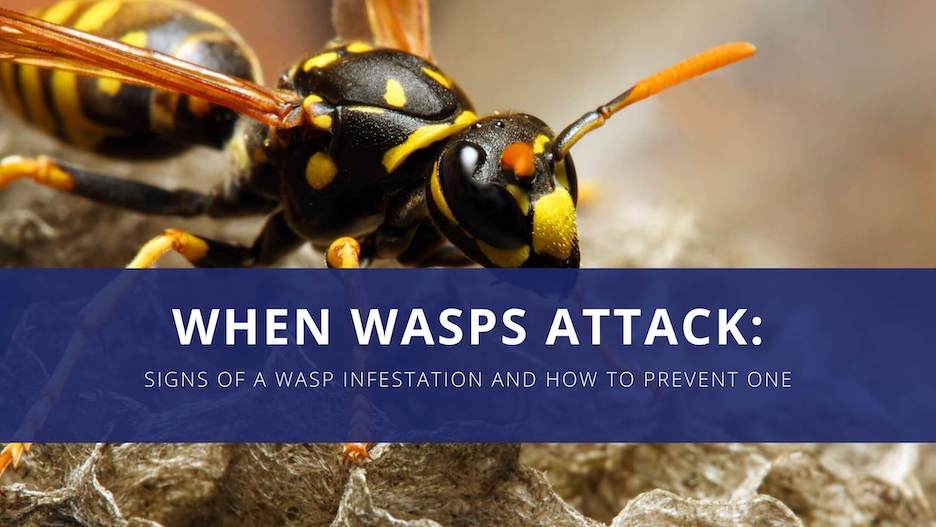 Wasps are among the most intimidating stinging insects to encounter. While many bees can only sting you once, wasps can sting multiple times. Stings are painful, and can even trigger an allergic reaction.

When you find a wasp nest around your home or business, it can be a cause for alarm. Being predators, wasps are often found eating garden pests from your flower beds or vegetables, but too many wasps can be a health hazard for you, your family, and your staff.

If the wasp population has gotten out of control around your property, don’t try to solve the problem yourself, and don’t ignore it, thinking it will go away. You need the professional expertise of Wil-Kil Pest Control.

Is it a wasp, a bee, or something else?

Watching out for stinging insects during the summer months is important for your safety, but different types of insects have different appearances. In addition, some insects look like wasps to attempt to fool predators, but they’re not.

Wasps are among the common stinging insects often found in Wisconsin. Paper wasps, yellowjackets, and bald-faced hornets are the types of wasps commonly found in the area. Wasps, unlike bees, are very aggressive and have the ability to sting multiple times. A single attack from a wasp nest can lead to severe allergic reactions, shock, and even death. While all three species vary in color from white and black to yellow to orange, all wasps have smooth shiny bodies and can measure anywhere between ⅝ inch to 1 inch long.

If there’s any question about what kind of bug you’re dealing with, try to snap a photo and compare it with stinging insects or call Wil-Kil for a free inspection.

Where do wasps typically build their nests?

Much like us, wasps like to build their nests in places that will provide shelter from the elements. In nature, you might find many of their nests inside hollowed-out logs, but in your neighborhood, wasps will build their home in window sills, under decking, and on the eaves of your attic. And while those nests may look small, a typical wasp nest can house up to 20-30 adult wasps! Other common nesting spots include:

How do I know it’s a wasp nest?

Wasp nests can look different depending on the kinds of species that make them. Social wasps usually make nests above ground, while solitary wasps bury theirs beneath the ground. If you see an insect nest with the following characteristics, it probably belongs to social wasps:

Depending on where the wasps have built their nests, it can be difficult to remove them. Never try to knock a wasp nest down on your own. Because wasps will vigorously and aggressively defend their territory, you could put you or your family in severe danger by antagonizing them!

Why do I have wasps around my home?

If you’ve found an alarming number of wasps around your home, there’s likely something on your property that’s attracting them:

How do I prevent wasps from making my home their home?

If wasps are attracted to your home for any of these reasons, you can easily deter wasps by picking up decomposing wood on your property and limiting outdoor water resources as well as access to food. Bright floral decor that is likely attracting garden pests will also attract wasps as they hunt for insects to feed on. Try moving your floral arrangements away from your home.

Wasps don’t limit themselves to garden pests though. They will also feed on trash that contains protein-rich debris. That’s why you should keep your trash away from the home at the end of the driveway or out of reach in a plastic or metal bin.

Why should I call a professional for my wasp problem?

If you’ve done everything to make your home less appealing to wasps and they’re still squatting on your property, it’s time to call in the professionals. While there are some DIY methods you can use to get rid of wasps and hornets on your property, many of them are ineffective. Others contain harmful chemicals that could be unsafe for you and your family.

Even if you’ve managed to get rid of the wasp nests outside your home, wasps can occasionally make nests in your walls, which can be even more difficult to remove. The best course of action is to contact a professional pest control company to safely remove these stinging invaders.

Because wasps are known for being more aggressive than bees when provoked, you shouldn’t try to remove your wasp problem on your own. Instead, call Wil-Kil Pest Control. Our trained pest professionals understand the risks of exterminating wasps and utilize company safety protocols to quickly get your wasp problem under control.

If wasps have invaded your property and made enjoying the outdoors a perilous task, contact us today!