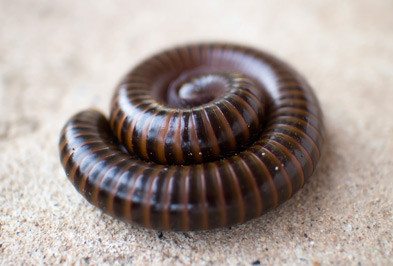 Color: Millipedes are most often blackish or brownish, but some are red, orange or patterned.

Characteristics: Millipedes are usually cylindrical and worm-like, but some can be slightly flattened. They have 1 short pair of antennae and 30-90 pairs of legs.

Millipedes are sometimes known as “thousand-leggers,” have a worm-like appearance and have one pair of antennae. They are most often found near high moisture areas, such as in mulch and decaying vegetation.

What’s the difference between millipedes and centipedes?

Why do I have millipedes?

Millipedes rarely come indoors. If you’re finding millipedes in or around your home, they have found a high moisture area to nest in.

How do I prevent Millipedes?

There are a few things a homeowner can do to prevent millipedes outdoors:

Similarly, it is important to prevent high moisture areas in your home and have proper ventilation in areas like basements, bathrooms, and crawl spaces.

How do I get rid of millipedes?

The most important thing you can do is to eliminate all high-moisture areas. Repairing any leaks and sealing any cracks or crevices around plumbing should keep millipedes out of your home. If there is still a concern, please call or contact a Wil-Kil technician for professional millipede removal.

How Do Fall Insects Get Inside

Ever wonder how it is that fall pests, like Asian lady beetles, boxelder bugs, stink bugs, and cluster flies, find their way into your home? [...]

The weather is starting to cool off again, which means we have the pleasure of dealing with a whole new variety of fall insects looking [...]

September means back to school, the return of cooler weather and the invasion of over-wintering pests. Over-wintering pests are those pesky creatures that move into structures in the fall, camp out and lay dormant all winter, and then emerge with abandon at the first sign of warm weather. The most common over-wintering pests in the upper Midwest include Asian lady beetles, box elder bugs and cluster flies.

Pest control companies receive an influx of calls in the spring when these pests try to exit homes or businesses. The best way to avoid seeing them in the spring though, is to prevent them from entering your home or business in the fall. So, how do you keep over-wintering pests out?

Not quite ready for your free quote? Simply give us a call to discuss your pest problem(s)